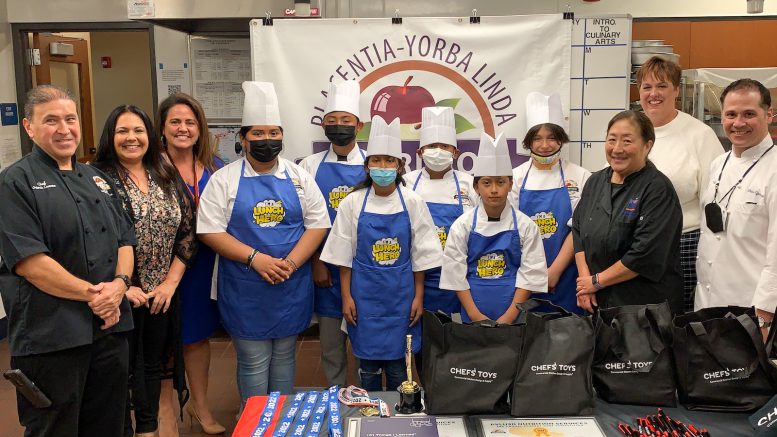 This cooking challenge was crafted by district chef Orlando Luevano with the County After School Activities (CASA) programs at the schools. The goal of the competition is to offer students the opportunity to showcase their culinary skills and to compete for their dish to be on the elementary school menu.

PYLUSD Nutrition Services held preliminary competitions at all three schools to determine which students would compete in the “Championship Cook-off.” Students worked with staff to create their recipes and present them to a panel of judges. Students were scored on originality, flavor, preparation, and presentation of their dish.

The final round of the competition was held in the culinary classroom at Yorba Linda High School (YLHS), where six student chefs made their recipes come to life with state-of-the-art cooking equipment to craft their delicious entrées. The elementary students cooked with the help of YLHS culinary pathway students who served as their “sous chefs.”

After hours of attentive preparation, skillful cooking, and deliberation from the judging panel, the first place entrée went to fifth-grader Delilah Hernandez Lopez from Rio Vista. Fifth-grader Maria Canizalez from Ruby Drive scored second place for her tasty dish. The winners will be able to see their creations on the district’s lunch menu in May.

Congratulations to PYLUSD Nutrition Services for hosting a successful cook-off and to the elementary student competitors for their hard work and imaginative menu ideas. Well done, PYLUSD!