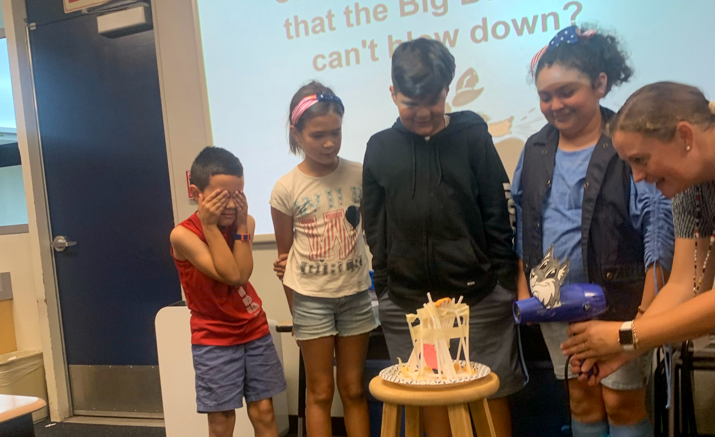 The school’s first and second graders were presented with the “Spaghetti Marshmallow Tower Challenge.” They were given sticks of dry spaghetti, one marshmallow, and one yard of tape, and instructed to build the tallest tower possible (in 15 minutes) that will support the marshmallow. Throughout the process, primary students practiced the design process which included thinking, prototyping, and doing. It was amazing to hear their collaborative conversations and thought processes, and see it all come to fruition as they tested their marshmallow on top of their tower!

Third and fourth graders were asked the question, “Can you build a house the Big Bad Wolf can’t blow down?” They were assigned one of three building materials: straw (plastic straws), sticks (popsicle sticks), and bricks (sugar cubes) and given the option to choose their “mortar” (either tape or play dough). Each team member was given the opportunity to draw and explain their design to the rest of the group; the students then decided which aspects of each design they liked best, and put them together to form their final house design. (Little did they know the Big Bad Wolf was Mrs. Leiva’s hair dryer!) The kids had a great time working with their teams on the project, and didn’t even realize they were thinking critically and problem-solving while having so much fun!