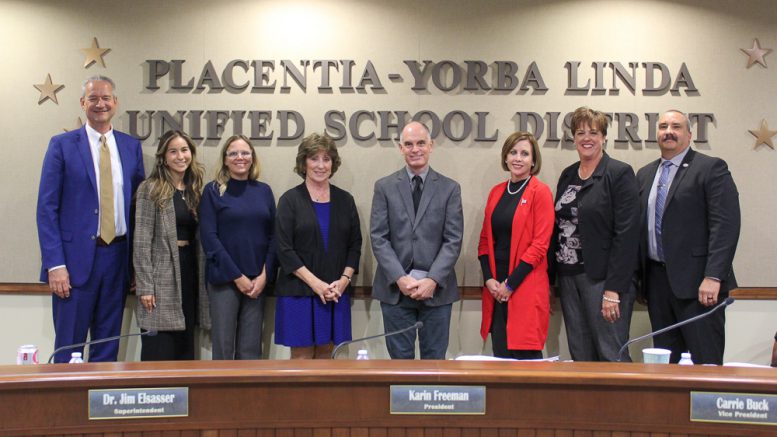 On Tuesday, October 12, the Placentia-Yorba Linda Unified School District (PYLUSD) Board of Education honored longtime El Dorado High School teacher, Mark Switzer, with the “You Are The Advantage” Award. This award recognizes community members, organizations, and employees who embody the District’s four core values of excellence, collaboration, integrity, and innovation.

Mark has distinguished himself as an outstanding teacher and partner to the district through his work at El Dorado High School and in the Digital Media Arts Academy, known as DMAA.

Mark was first hired by PYLUSD to serve as a teacher at El Dorado in 1997 after earning his teaching credential from Chapman University. He has been a Golden Hawk ever since. His credential is in social science and he has taught several grade levels, but in 2006, he began teaching video production classes after starting a school film festival in 2003. His passion for the field eventually compelled the school to launch a video production and broadcasting class just two years later. Then, in 2011, Mark played an instrumental role in pioneering the Digital Media Arts Academy that we know and love today.

Fast forward to now, Mark serves as both a coordinator and instructor for the DMAA program. The Academy has grown tremendously in size and popularity, and now encompasses four pathways—photography, graphic design, game art design, and of course, broadcast film. This school year, Mark has a full schedule teaching students in video one, media production, and advanced video and film production. This includes producing Hawk Talk, an award-winning weekly news show that is broadcast at the school.

Mark has been honored as Teacher of the Year by the Orange County Department of Education and has earned multiple awards for his and his students’ work in DMAA. Mark’s wife, Kathleen, also works as a teacher at El Dorado and their son, Owen, joined them this year as a freshman.

“It is safe to say their family bleeds black and gold,” Superintendent Dr. Jim Elsasser shared that evening.

When asked about Mark, El Dorado Principal Joey Davis, said: “Mark is an amazingly talented teacher. He and the students’ weekly video broadcasts are a key piece of the El Dorado High culture. He is an awesome teammate and devoted to celebrating all the great things that our school has to offer.”

For many years, Mark has assisted district office staff with various video projects. This includes the Superintendent’s annual back-to-school video at the beginning of the year and the district’s employee of the year videos.

“He is always willing to help and makes sure to find a way to involve students or DMAA graduates in this work, guiding them with patience and wisdom in order to produce professional, high-caliber videos for our entire community to enjoy,” Superintendent Dr. Jim Elsasser noted. “We are incredibly grateful for his talents and service”

It is clear that Mark epitomizes the district’s four core values with an enduring commitment to excellence, collaboration, integrity, and innovation. His videos and dedication to teaching students broadcast film certainly have a positive impact on the entire school district community. The district is proud to have presented him with the You Are the Advantage Award! Congratulations!